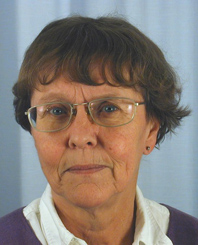 Our long time colleague and friend Inger Ahlgren is no longer with us. She died on April 12, 2009, after a period of illness.

Inger Ahlgren (PhD) was a senior lecturer in (Swedish) Sign Language at the Department of Linguistics at Stockholm University, Stockholm, Sweden. The early years of her academic career were devoted to Russian and Chinese among other things, but in 1969 she was recruited to the Department of Linguistics, where she defended her PhD-thesis Interaction between form and content in linguistic perception in 1975.

In 1975 Inger Ahlgren initiated the research project “Early Cognitive Development in Deaf and Hard of Hearing Children” that came to be of great significance particularly for Deaf children’s access to early communication through sign language. Thanks to her work, a day nursery exclusively for Deaf children situated in central Stockholm was opened, with the local Deaf Club as next door neighbour. A part of the research project was the so-called “Saturday School” for deaf children at Stockholm University. There, deaf children could meet each other and deaf adults, and develop their sign language. In addition to filming the children and their linguistic development, courses in “communicating with deaf children” were also organized. Deaf parents of deaf children were recruited to teach hearing parents to sign. While the classes were held, the children played with each other, minded by deaf adults.

Inger was instrumental in setting up the International Sign Linguistics Association (ISLA) in 1986. ISLA was the forerunner of SLLS, and was she the first secretary of the association.

In co-operation with Gunnel Sträng (then information secretary with the Swedish National Association of the Deaf (SDR), Inger was involved in arranging the International Conference on Bilingualism in Deaf Education in Sweden in 1993. Inger and Gunnel were both awarded a medal for their work by the World Federation of the Deaf (WFD) at their Congress in Vienna in 1995.

The Swedish National Association of the Deaf (SDR) awarded her with “Kruth medal” number 7 in 1995. This is a medal that is given to people who have made substantial contributions for deaf people, and she was awarded it for her work towards the recognition of (Swedish) Sign Language as a real language as well as her efforts to create opportunities for Deaf people to study at Stockholm University.

During her last years at the Department of Linguistics she was involved in dictionary work and the data base for Swedish Sign Language, but she also began to do linguistic work on the Swedish dialect älvdalska (known for being so remote from Swedish as to be a language of its own). When she retired in May 2007, a symposium on Sign Language Lexicography in a European perspective was held for her.

— Anna-Lena Nilsson, for friends and colleagues at Stockholm University