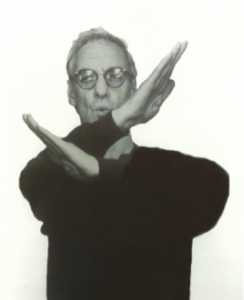 Wim Emmerik: dancer, poet, actor, translater, teacher and researcher of NGT (Sign Language of the Netherland) passed away at the age of 75 on November 22, 2015.

From the beginning of the 1980s he was involved in NGT teaching and research at the department of General Linguistics at the University of Amsterdam. He worked with most NGT PhD’s in the Netherlands, first with Professor Ben Tervoort, later with Professor Anne Baker. In the last years of his career he worked at Radboud University Nijmegen with Onno Crasborn and his team.

Originally Wim an instrument maker and dancer, but after coming into contact with research on ASL he increasingly got interested in sign language research. He was the first Deaf university employee at University of Amsterdam (UvA) to study on and describe NGT, e.g. in the KOMVA project of NSDSK and UvA, with Trude Schermer and others. Later he supported PhD’s in their NGT research, patiently and always with humor. He was a fantastic teacher and taught students the rudiments of sign language by telling stories, jokes and inviting them to his home and into the Deaf community.

He was an intriguing actor and was one of the founders of the Handtheater.

When he retired in 2005 he received the first NGT award from the Dutch Deaf Association (Dovenschap) for his contributions to NGT and to the performing arts.

The Deaf community and the academic NGT community will miss his creativity and his inspiration greatly.