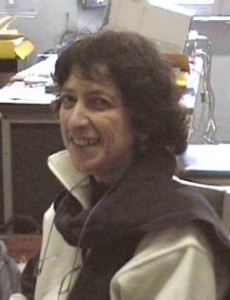 Elena Pizzuto died on January 14, 2011, four days after her 59th birthday, after a relatively short period of illness, as a result of cancer. Elena’s premature death leaves a huge void in the lives of her friends and colleagues, as well as in the deaf community.  She was a good, generous friend and a passionate scientist. Her enthusiasm for research was contagious, and her creative way of thinking has provided bright ideas and suggestions for projects to many of us. We often teased Elena, because she used to complain about not having enough time to pursue all the new ideas incessantly arising in her lively mind: sad to say, time was merciless against her. Elena was clear-headed and serene until, a few days before her death, she was struck by a devastating ischemic attack (i.e., a stroke). Her major concerns were for her beloved husband and the research project (Visel) that she was coordinating: she was especially keen to keep alive the spirit of the project: “working together with and not for deaf people”.

Elena was born in Santo Stefano Quisquina, a small Sicilian town, on January 10, 1952.
After receiving a Bachelor’s Degree with honors in Philosophy from the University of Palermo, she moved to Cambridge, USA, where she earned a Master’s degree from the Harvard University Graduate School of Education, in 1977, and then a Certificate of Advanced Studies in Human Development, in 1979.
Here her long-lasting interest for sign languages began at this time, starting with ASL. During one year spent as a Visiting FulbrightScholar at the Salk Institute for Biological Studies, Laboratory for Language and Cognitive Studies (LLCS), in San Diego and at the Universities of Boston and Temple, she extended her research into American Sign Language (ASL), conducting empirical studies on sign language acquisition in deaf American children, with particular attention to pointing.
Back to Sicily in 1980, she started, outside the academic world, to make contact with Deaf people, in order to raise awareness in young Deaf people that their form of communication was a real language. She fostered a meeting between a vernacular Sicilian poet, Butitta and an American deaf poet, Joseph Castronovo, whose native language was ASL.  Castronovo was visiting Sicily with the aim of both retracing his Sicilian cultural roots  – his father was born in the same Sicilian town in which Butitta was born -, and exploring the presence of signed language art forms among Sicilian deaf people.
The academic Sicilian world was quite unresponsive to her suggestions for research projects, so in 1982 she moved to Rome, to join Virginia Volterra’s group at the Institute of Psychology (now Institute of Cognitive Sciences and Technologies of the National Research Council of Italy) where she remained as a permanent researcher until the end.
Here she developed her two strands of research, geared to distinguish the respective role of universal factors – independent from the specific language or expressive modality – and of characteristics specific to a language or expressive modality in the development of language abilities and on underlying cognitive processes.
Elena’s two research areas were (a) language acquisition, focusing in particular on the relationships between gestural and vocal modalities, deixis and morphological aspects, both in children who are learning spoken languages and in children who are learning signed languages, and (b) sign languages, considered inside a cross-linguistic and cross-cultural framework. Elena was involved, between 1999 and 2001, in two important projects. The first, “A Cross-linguistic Study of the Expression of Modality in Three Mediterranean Signed Languages”, was coordinated by Sherman Wilcox in the Department of Linguistics at the University of New Mexico, USA; the second, “Infant Deafness: Early Intervention”. The latter  was an Italy-Tunisia joint project lead  by Elena herself, which has had arisen almost by chance from the meeting of her future husband, who introduced her to a school for deaf children in Douz.
To stimulate the cross-linguistic work, in 2004 she organized, in collaboration with Università Roma Tre, Department of Linguistics, the International Colloquium on “Verbal and Signed Languages Comparing Structures, Constructs and Methodologies”.    From this Colloquium derived  the well known book  Antinoro Pizzuto, E, Pietrandrea, P., Simone, R. (eds.) (2007), Verbal and Signed Languages: comparing structures, constructs and methodologies. Berlino: Mouton De Gruyter.

Elena was fascinated by methodological problems, especially by the translation and transcription issue of spoken languages in relation to language acquisition (here we have to mention that Elena coordinated the CHILDES-ITALIA Project supervising the translation of the CHILDES manual into Italian). The issue she was deeply involved in recent years was the identification of appropriate tools for representing in written form sign language productions of any sort, i.e. lexical items, utterances, discourse at large. In fact, she strongly believed that written representation is a crucial issue for the advancement of signed languages analysis and description. Together with her deaf colleagues and doctoral students, she explored the use of Sign Writing (SW) as a tool both for composing texts in written Italian Sign Language (LIS) form and for transcribing corpora of face-to-face LIS discourse. This work led to the creation of a “Sign Language Laboratory” at the ISTC-CNR,  and to a joint project with the Istituto Statale dei Sordi di Roma (Rome Institute of the Deaf?) on “LIS writing and SignWriting”.
Her interest in sign language notation lead Elena into a close collaboration with Christian Cuxac (Université Paris 8, France), adhering to his semiological model that attributes a crucial, formal role in shaping sign language discourse and grammar to iconicity. Among other notation systems, SW was chosen as an optimal candidate  for handling “highly iconic structures”: the joint project CNR/CNRS “Language, its formal properties and cognition: What can be learned from signed languages” (2004-2007) allowed them to further develop their fruitful partnership.
In 2009, Elena launched a national project,  “E-learning, Deafness, Written Language: A Bridge of Letters and Signs Towards Knowledge Society – VISEL”, aiming to construct visually grounded, distance learning environments in which learning tools and materials to promote deaf learners’ written language skills are made available in different forms. In this context, experiments in written LIS, involving deaf professionals, play a substantial role to foster metacognitive and metalinguistic skills necessary for an independent use of written language
Lastly, we have to remember Elena’s deep engagement in higher education. It is worth mentioning her dedication in supervising BA and doctoral theses, in creating sign language teaching programs as well as establishing curricula, skills and competencies  required for different professionals involved in the deafness world and in advocating the needs for  sign language interpreter training. Her passion for research work has inspired many colleagues and students, who in Elena found not only an extraordinary scholar, but also a rigorous and honest person, in work as well as in her private life. Her legacy will live on through all of them to continue the work that was so abruptly interrupted.

— Her colleagues of the Institute of Cognitive Sciences and Technologies, National Research Council of Italy  (ISTC-CNR)