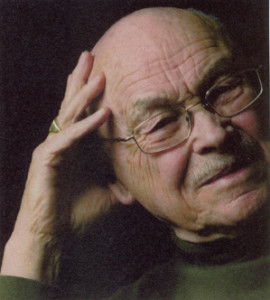 With sadness we must report the death of Professor Ben Tervoort, emeritus professor of Linguistics at the Universiteit van Amsterdam, The Netherlands. Ben (29 May 1920 – 17 August 2006) was well known in the field of sign linguistics for his pioneering work on signing in deaf children. As early as 1953 he was awarded his Ph.D. at the Universiteit van Amsterdam for his study of signed communication in a group of deaf children, published in English in 1961 under the title Esoteric Symbolism in the Communication Behavior of Young Deaf Children. Thereby he laid the basis for the study of signed languages both in the Netherlands and internationally. He also did research in the USA and was awarded an honorary doctorate by Gallaudet University in 1964. He was appointed professor of linguistics at the Universiteit van Amsterdam in 1966, with special responsibility for psycholinguistics and sociolinguistics. Ben was an inspiring teacher – he loved to tell stories – and he stimulated his students in their research on sign languages. Ben was one of the initiators of the research that led to the first dictionary of NGT in the early eighties and stimulated the organization of an international conference in Noordwijk in 1985.

Although Ben retired in 1987, he remained involved with and committed to deaf issues for the rest of his life. He was given a special award for his services to the field of sign linguistics at TISLR 7 in 2000.

Ben started his academic career from within the Jesuit order. He left the order in 1965 to marry and form a family. His work was characterized by an insistence on the importance of inter-personal communication, which he saw as essential for good human relations. The sign linguistics field now misses one of its pioneers. We extend our condolences to his wife, Dieuwertje, and his three daughters.

(1986) Signs of Life – Proceedings of the Second European Conference on Sign Language Research. Publications of the General Linguistics Department, Universiteit van Amsterdam, No.50.